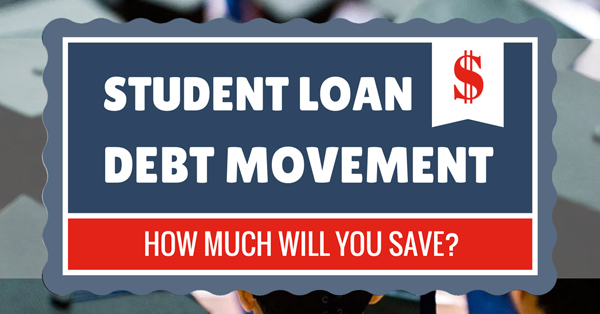 Student loan debt plagues so many of us when we graduate from college, especially after pursuing advanced degrees. When I received my first bill for my student loans after finishing undergrad, I honestly thought it was a mistake. I didn’t even remember taking out loans my freshman and sophomore years of school – that felt like ages ago! Fortunately, I only had about $7,500 to pay back, and I made my final payment on October 26th, 2017 (the interest rate was virtually zero, so it didn’t make sense to pay it off more quickly). It felt great! At the same time I knew that I was lucky that I didn’t have as much debt as many of my friends I graduated with.

Lindsey came to me initially because she wanted to figure out the most effective way to tackle her student loan debt. And the amount she owed was no joke – $240K in her pursuit of the advanced degrees required to become a pediatric nurse practitioner. Now she’s working full-time and making payments on her loans, but has other goals beyond making huge student loan payments every month! So she wanted to see if there was a way to pay off her loans more quickly. She was already doing a great job of organizing the loans and researching her options, and just wanted to make sure she was optimizing.

I asked Lindsey to prepare the following information for us to review (and for those playing along, you’ll want to do the same for your own student loans!):

She was a rock star and got the information together the next day! So that’s when we got to work figuring out her options. Because she had taken advantage of loan forgiveness on some of her federal loans already, and other loans were not eligible for forgiveness, we focused on high-interest high-balance loans long-term loans that were not candidates for forgiveness in the near future. We wanted to also make sure that any new payment terms would not put her out of range of what she could afford each month. There is a common misconception that consolidating student loans will result in a higher monthly payment. This could be the case in scenarios where the payback period is dramatically reduced, but often the favorable interest rate offsets that increase. So it’s worth just doing the math and making sure before committing to anything!

Ultimately Lindsey applied through SoFi and was approved for a $130K loan to refinance her outstanding high-interest longer-term debt. She has a 10-year payback period on the new loan vs. 25 years on the prior loan, but because the interest rate went from roughly 7.3% to 5.6%, the monthly payments aren’t that much higher, and over the life of the loan, she’s actually saving over $100,000 in interest payments. That’s amazing!

If you’re interested in learning more about how to pay off student debt more quickly, there are tons of resources out there.

This article is part of the Student Loan Debt Movement, which is encouraging and inspiring people to take action on their student loans. Check out the resources they’ve consolidated on their site, and learn how you too can reduce your overall loan burden, build for the future, and enjoy your life along the way.

As always, feel free to contact me directly if you’d like some coaching and support along the way!

Subscribe to stay in the loop on future posts, events and offerings.

You have Successfully Subscribed!